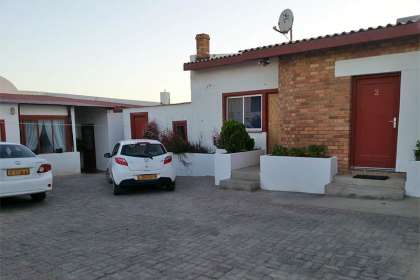 Sleeps 8 in 3 units
From R 375
Per person, per night sharing | Sleeps 4 adults max
* Rates may vary according to season

Self Catering Rooms With Communal Kitchen in Luderitz 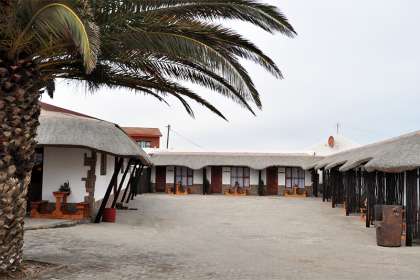 Obelix Guesthouse offers a homely environment, where our guest feel welcome and at ease. Scrumptious home - cooked meals and ample to eat. The atmosphere is relaxed and welcoming.

There is just something special about the harbour town of Luderitz in Namibia. 337km away from its closest large town, Keetmanshoop, with only one way in and one way out. Luderitz was founded in 1883 when Heinrich Vogelsang purchased Angra Pequena, a small cove, and some of the surrounding land on behalf of Adolf Luderitz. In the early 1900s the town saw a major boost when diamonds were found at Kolmanskop, but the diamonds were soon further out of reach and the town's growth almost stopped. But this is one of the things that draw visitors to Luderitz. Not much has changed since the early twentieth century and the small harbour town of Luderitz has an old world charm.

The roads haven't changed much over the years and the town is dotted with pieces of history. From the Deutsche Afrika bank, to the Railway Station, the Old Post Office, and the Felsenkirche or the church on the rocks. Goerke Haus is another perfect post card building that was built from proceeds of the diamond industry and situated on the wonderfully named Zeppelin Street. Other important buildings are the Krappenhoft and Lampe building, Woerman House, Troost House, Kreplin House, and the Turnhalle.

Today a visit to Luderitz harbour won't bring sights of passenger liners docked in the historic port, but rather smaller diving vessels and fishing boats bobbing up and down on the water as the sun sets over the Atlantic Ocean. The harbour was unable to moor larger vessels as it harbour has a rock bottom and the shallow depth, but again this has helped Luderitz to retain its charm. Some changes have been made though and Luderitz has re-styled itself in an attempt to lure tourists to the area, changes which include the new waterfront shopping and office area.

There are also some special sights to see around Luderitz like the Kolmanskop Ghost Town. Kolmanskop was once a bustling diamond town, but today it lies abandoned and constantly fighting the ever moving sand dunes of the Namib Desert. There are tours every morning around Kolmanskop and after the tours visitors are welcome to explore the town at their own leisure. There is also the drive out to Diaz Point and Grusse Bucht (Big Bay), the place where the original cross that Batholemeu Diaz planted on his early excursions to Southern Africa can be found. Over the years the cross deteriorated but has been replaced by a replica which still stands today. Another point of interest is Shark Island. This area now houses the Luderitz campsite but all was not that welcoming in the past, Shark Island was once a concentration camp where thousands of prisoners were kept in under terrible conditions which lead to an extremely high number of deaths.

When traveling to Luderitz it is important to remember that you are traveling through a desert with active dune movement and the final 10km of road into Luderitz can be covered by low sand dunes, which seem eternally determined upon crossing the road. Conditions on the only road to Luderitz can and do get hazardous, especially if the wind is blowing the sand and visibility is restricted, so care is advised.

Luderitz has a mild desert climate, with pleasant temperatures throughout the year and a low average annual precipitation of 23 mm.