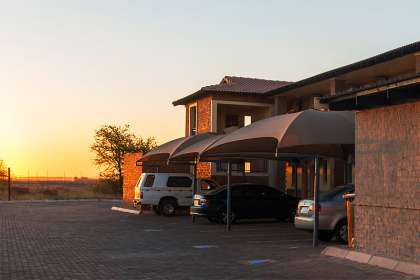 Sleeps 156 in 78 units
From R 745
Per person, per night sharing
* Rates may vary according to season

Kathu Inn provides self catering chalet accommodation In Kathu. Kathu is the iron ore capital of the Northern Cape Province. Its name means "town under the trees", after the Camel Thorn forest it is situated in. Our self catering accommodation features: A

Kathu is a town in the Northern Cape, South Africa. The name Kathu means "town under the trees". This name was used as a marketing drive to attract tourists and has since stuck. It was named Kathu because is situated in the Camel Thorn forest.

The pods of the Camel Thorn trees have a powder in them which the locals are known to use as porridge. There are only two Camel Thorn Tree Acacia erioloba forests in the world. In 1920 it was declared a State Forest and in 1995 it was registered as a Natural Heritage Site. The Kathu forest is approximately 4000 hectares in size and has a high diversity of animal and plant species and protected species in and around the forest. Some of the bigger trees in the forest are known to be older than 300 years old. It is truly a magnificent forest.

Kathu is also known for its iron ore mining activity in the Kalahari. The iron ore mine opened in 1973 and towns were established to accommodate mine workers. The town acquired municipal status in 1980. Kathu is situated in-between Upington and Vryburg and offers visitors and locals a game reserved which is well stocked and a lovely golf course where you can relax and enjoy hitting some practice balls or enjoy a little competition with friends. There is also a swimming pool and tennis courts at the local sporting complex.

Kathu is a beautiful area and attracts tourists from all around the world.

Attractions:
There is so much to see and do in the area with nearby abseiling, 4x4 routes and a game reserve offering game and a large variety of bird species to admire. There is also a recreation resort in the area where you can enjoy camping, fishing, and horse-riding to mention only a few. The Mine offers guided tours of the worlds largest open-cast iron mine. These tours are by appointment only.

Climate:
Kathu is situated in the Northern Cape which enjoys warm to very hot summer months with most rainfall during these months. The winter months are sunny and cool with temperatures dropping considerably in the evenings.