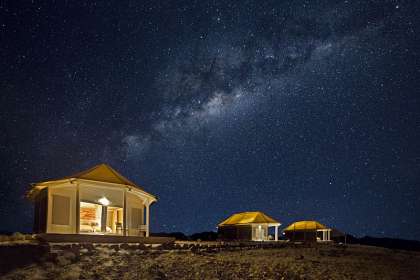 Sleeps 26 in 12 units
From R 3610
Per person, per night sharing | Sleeps 4 adults max
* Rates may vary according to season

Sesriem is a small settlement which is located approximately 4.5 kilometres from the entrance gate of the Namib-Naukluft National Park. The settlement is especially know because Sesriem gate is the main access point to the Namib-Naukluft National Park for visitors entering the park and visiting the nearby Sossusvlei. As a settlement, like most other settlement in the Namib Desert, Sesriem has a minimal number of facilities such as a petrol station and other basic services including public telephones and a couple of small kiosks where travellers can get general supplies such as food and water.

But it is the Sesriem Canyon and its history that play the most important role in this settlement. The Tsauchab River has shaped this canyon into the Namib Desert over millions of years and it is one of the few places in the area that holds water all year round. The canyon is about a kilometres long, at places 30 meters deep and only two metres wide in other places. It is said, although it could be local legend rather than fact, that early explorers in the region named the canyon after the fact that they had to use six leather straps (ses - six, riem - strap) tied together to create a rope long enough to lower buckets into the canyon below for water. There are parking facilities in Sesriem where visitors can park their vehicles and take a walk through the canyon. Although the canyon is narrow in certain places, it is more than worth exploring because of the stunning rock formations that captivate almost everyone's attention.

The journey to Sesriem is one that takes most of a day from Windhoek. The trip includes some rather difficult mountain passes on some secondary roads, so your choice of route is essential especially if you don't bring a high-clearance vehicle (there are several routes from Windhoek). The easier route and probably the best route if you are trying to avoid the mountain passes would be from the south-central town of Mariental. But if you can do the passes, don't avoid them as they provide excellent views of the Namib.