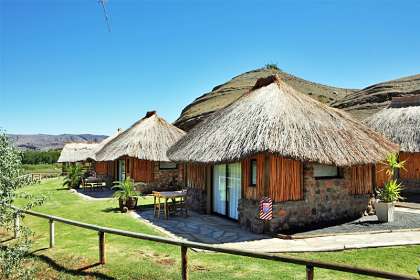 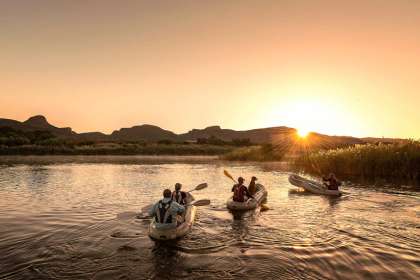 Sleeps 27 in 20 units
From R 225
Per person, per night sharing | Sleeps 6 adults max
* Rates may vary according to season

Orange River Rafting Lodge is located on the banks of the Orange River near Vioolsdrift in the Northern Cape, South Africa. We offer an assortment of accommodation, including self catering chalets, campsites and river rafting at affordable rates in a peac

Noordoewer is a small village on the banks of the Orange River, known for being one of the hottest places in Namibia. Its name means North Bank in Afrikaans, in reference to the north bank of the Orange River. The village lies opposite the South African town of Vioolsdrif, to which it is connected by the road bridge which forms the northern end of the South African N7 and the southern end of the Namibian B1. Fortunately, there is an abundance of water, used to irrigate fruit, in particular grapes. It is known for grape production and canoeing and is an important border post on a crucial transport route between the two countries. The village consists of the border post, a post office, bank, a couple of garages and minimarkets and a hotel. A few kilometres northwest of town along the banks of the Orange River are the base camps for a number of canoeing and rafting companies. Spending a few days floating down the river either in winter or submerged alongside your canoe in summer is a fabulous way to unwind from the rigours of the road.

Climate
The climate is harsh and dry, with extreme temperatures of up to 53°C having been recorded in mid-summer. Activity should be restricted to early mornings and late afternoons. Nights are cool, but may become chilly during winter. Heavy night time dew occurs.