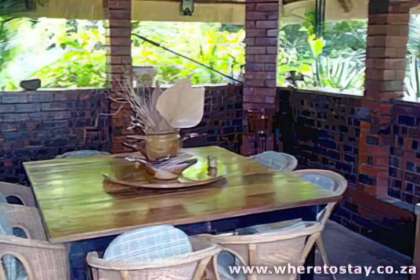 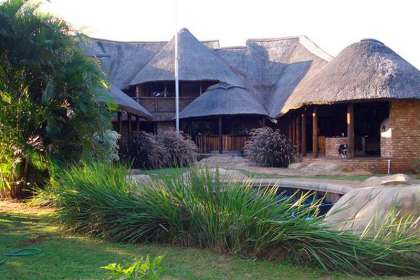 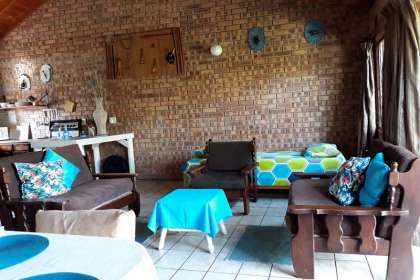 Sleeps 16 in 3 units
From R 295
Per person, per night sharing
* Rates may vary according to season

We are located in the main street, on the lake side, away from the busy noisy town centre, still within walking distance to shops etc. Accommodations are set in a natural tranquil garden. 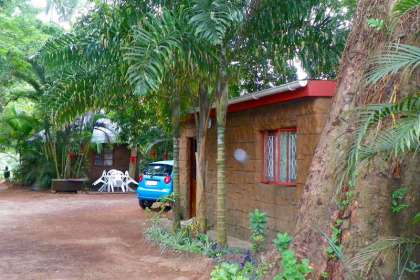 We are within walking distance to nearby restaurants, shops & pubs on the main street of the village of St. Lucia. 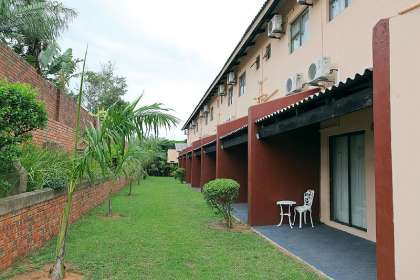 The Elephant Lake Inn is located in the town of St Lucia, Kwa Zulu Natal, surrounded by the iSimangaliso Wetland Park, South Africa's first World Heritage Site. St Lucia is 25km from the main N2 route between Durban and Swaziland. 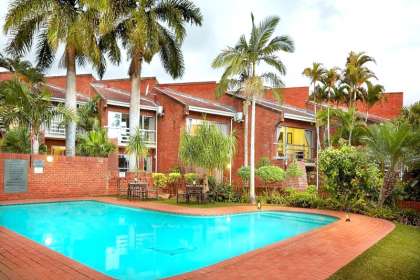 Sleeps 10 in 2 units
From R 460
Per person, per night sharing | Sleeps 4 adults max
* Rates may vary according to season

From JHB: Take N12 to Witbank, turn off to Ogies. Go through Bethal, Ermelo, Piet Retief, Pongola. Continue south along the N2, past Mkuze and Hluhluwe. Take turn-off left to Mtubatuba and St Lucia signboard, the R618 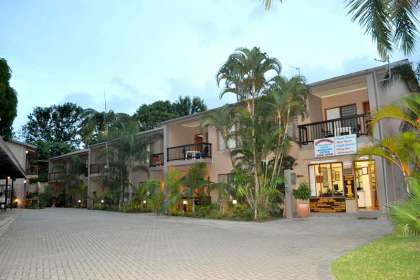 Sleeps 15 in 5 units
From R 750
Per person, per night sharing | Sleeps 3 adults max
* Rates may vary according to season

Welcome to Shonalanga Lodge St Lucia - South Africa. We are situated in the heart of St Lucia, a small town in the World Heritage Site. Shonalanga Lodge and Tours is within the proclaimed Greater St Lucia Wetland Park Reserve, the largest lake in Africa. 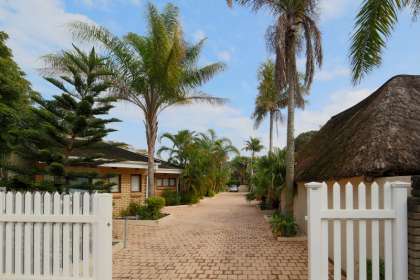 If you have a love of the outdoors or love to explore nature and a sense of adventure, St Lucia 14 on 103 McKenzie is the one for you! This 6 sleeper luxurious, self-catering, air-conditioned chalet is perfect for families looking for an active scenic hol 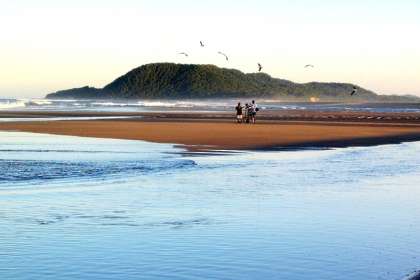 Sleeps 17 in 4 units
From R 400
Per person, per night sharing | Sleeps 6 adults max
* Rates may vary according to season

St Lucia Palms holiday flats are situated in the heart of this famous World Heritage site known as The iSimangaliso Wetland Park. Whether you prefer to relax by the pool or partake in one of the many tours or excursions, it is the perfect location for you 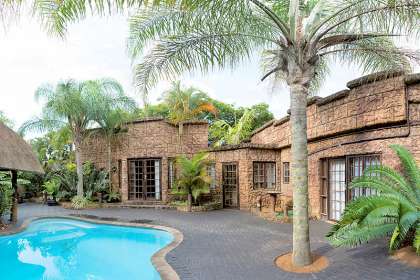 The Sweetest Spot is a beautiful, spacious, 4 bedroom self-catering house with two bathrooms en-suite and 1 guest bathroom. All bedrooms have queen size beds. 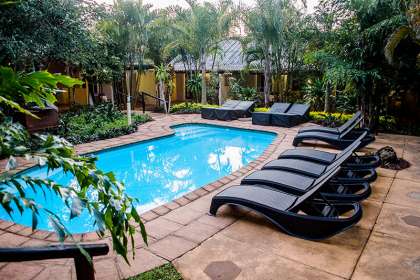 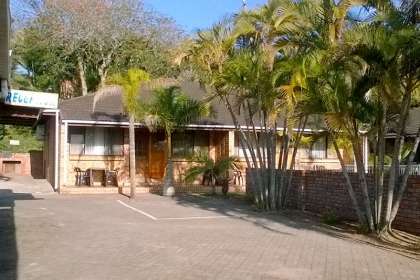 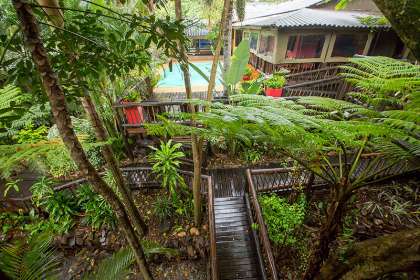 Graded:
Sleeps 28 in 11 units
From R 1200
Per person, per night sharing | Sleeps 4 adults max
* Rates may vary according to season

Our 11 en-suite bedrooms are air-conditioned and has got TV's, 11 DStv channels, Bar Fridges, Coffee & Tea facility, Hair Dryer, etc. to make your visit as comfortable as possible. The bathrooms have got baths and showers. 8 Bedrooms have 2 Single... 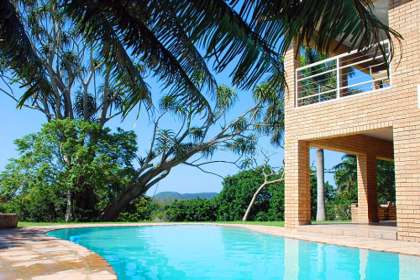 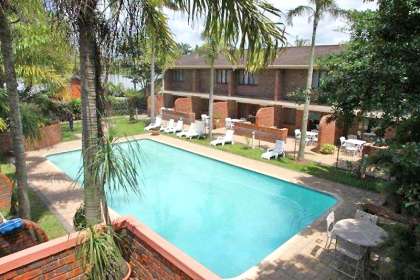 Sleeps 4 in 1 unit
From R 385
Per person, per night sharing | Sleeps 4 adults max
* Rates may vary according to season 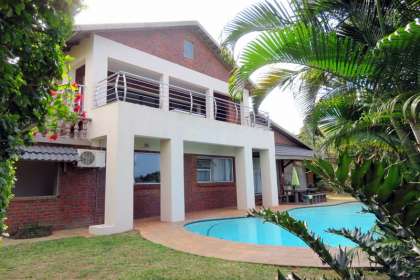 Graded:
Sleeps 30 in 6 units
From R 700
Per person, per night sharing | Sleeps 5 adults max
* Rates may vary according to season 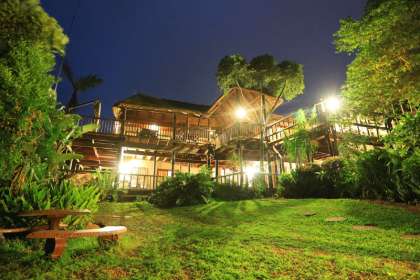 Graded:
Sleeps 26 in 8 units
From R 765
Per person, per night sharing | Sleeps 4 adults max
* Rates may vary according to season

Ndiza is a privately owned establishment committed to service and quality as well as dedicated personal attention while hosting guests in beautiful South Africa. You will leave Ndiza with cherished memories and experiences. 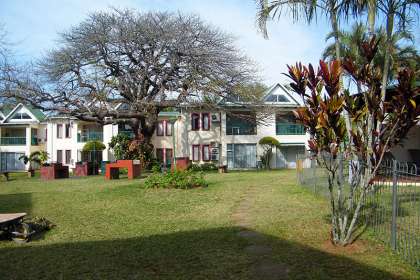 No.9 The Bridge. Recently refurbished, 2 bed ground floor unit, sleeping up to 6 - double bed in main room and 2 singles in the second with a sleeper couch in the lounge. 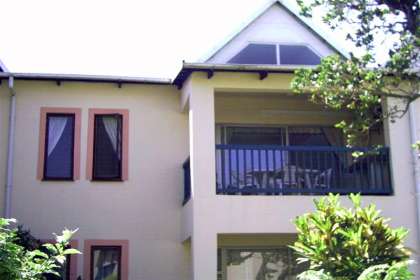 Sleeping 6 people as follows (1 double bed and 4 single beds). A chest freezer is available, a DStv decoder and TV is provided (you need to bring your own smart card - limited availability from letting office on site), the complex is up market ... St Lucia Holiday Cottage is your best choice accommodation for visiting St Lucia. Our property borders the iSimangaliso Wetland Park, offering premium views of both sea and lake. Our private holiday home is pure paradise. It is uniquely located...

The small town of Mtubatuba is situated fifty five kilometers north of Richards Bay, close to the entrance of the Greater St Lucia Wetland Park, making it an ideal base for exploring the park . The town was established in a region largely dominated by swampland of reeds and papyrus in 1903 and named after the local Zulu chief. The town's early years were hampered by flooding. An additional setback occurred during World War I when a ship carrying essential parts of what was to be the town's first sugar mill was torpedoed, resulting in the mill eventually being constructed in 1916 at nearby Riverview.

Mtubatuba has developed a long way from its early days as a humble railway siding into a strong sub-regional commercial, service, transport and administrative centre for the entire North Eastern Zululand region. In the last few years there has been substantial commercial growth in Mtubatuba with retail and wholesale outlets springing up in the region.

A notable venue for unforgettable outdoor family activities is the nearby Hluhluwe-iMfolozi Game reserve,
awesome home of elephants, lion, both rhino species, countless plains game abundant bird life and the typical Zululand flora of thorny scrub and indigenous bush. The Reserve offers interesting 4x4 trails, revealing the secrets of the bushveld. The park also offers a number of self-guided hiking trails which vary in length, and guide books are available for visitors to help them interpret the many points of interest along these trails. There is also a 40 seater boat which takes visitors on guided trips twice a day along Hluhluwe dam, though the water level of the river is sometimes too low for boat trips.

A slightly shorter distance east is the equally but differently charming St Lucia and its accompanying wetlands and eventually the Pacific Ocean, home to countless species of tropical fish. To reach St Lucia from Mtubabtuba, the R618 passes through the magnificent, almost primordial Dukuduku Forest, famous for among other things, its rare tropical butterflies. A walk through the forest takes you to Furululu Lake, with its abundance of ferns, orchids and the water loving hippo.

The nearby beaches of Cape Vidal provide safe swimming areas and an amazing tranquil setting for guests that want to soak up the sun. Due to popularity of deep sea and spear fishing in this area, selected launch site for ski boats have been provided at Cape Vidal's protected bay. There are also a number of guided hiking paths around the fascinating wetlands and the Lake Bhangazi shoreline, not to mention the site of the Dorothea shipwreck which adds to the unique vibe of the area.


Another of the many attractions in the Mtubatuba area is the Dumazulu cultural village, where visitors are able to enjoy an authentic African cultural experience whilst staying in the traditional, ethnic accommodation at Dumazulu Lodge. The village offers visitors a unique and informative glimpse into Zulu traditions including basket-weaving, spear and shield making, beadwork, pot-making, Sangoma bone-throwing and spectacular Zulu dancing.