One of Namibia's most prominent tourist areas was until September 2013 known as the Caprivi Strip or the Caprivi Region. Today the 450 square kilometre area, popular for its tropical rivers and wildlife, is now called the Zambezi Region, after the river that forms its northern border with Angola. Two other towns, which had also been named after German colonial politicians, also had their names changed to local languages. Schuckmannsburg in the former Caprivi region was changed back to its original name, Lohonono and the harbour town of Luderitz, in the Karas Region, is now called Naminus, which means embrace in the local Khoisan language.

The Zambezi Region reaches eastwards from the Kavango Region and is bordered by four other African countries, namely Angola, Zambia (north), Botswana (south) and Zimbabwe (east). Its unusually green appearance for this part of Africa can be contributed to the three perennial rivers that cross the region, also making it a wetland paradise in the otherwise arid country. The Zambezi Region also links visitors to the world renowned Okavango Delta and Chobe National Park of Botswana, Zambia's and Zimbabwe's Lake Kariba and the seventh wonder of the world, Victoria Falls. As these are all major tourist attractions, day trips, transfers, camping and fishing safaris can be arranged from the Zambezi Region to any one of these neighbouring countries.

The Zambezi Region is divided into 2 parts, Western and Eastern. The Western part of the region, which falls between the Okavango River (western side) and Kwando River (eastern side), forms the Bwabwata National Park. The area also forms part of what is planned to be the KaZa Park, which will be a Trans Frontier Conservation Area between 5 Countries, Namibia, Angola, Zambia, Botswana, and Zimbabwe, and will be the largest Trans Frontier Park in Africa after its completion. Another interesting fact about this part of the region is that it is part of the Elephant and Buffalo Trek Routes, and has no fences on the borders in order to allow animals to pass freely in their yearly migration. The Western part of the Zambezi Region is also home to the Mahangu Game Reserve at Divundu, as well as the thoroughfare to the Okavango Delta and Poppa Falls about 2 km south of Divundu. The whole Kwando river area which also falls into this part of the region is a birder's paradise. 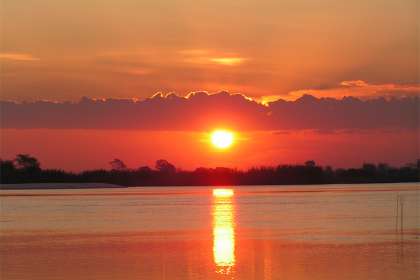 Sleeps 8 in 3 units
From R 1000
Per person, per night sharing | Sleeps 3 adults max
* Rates may vary according to season

Caprivi Houseboat Safaris' Lodge is an exclusive lodge nestled amid a lush green garden on the banks of the Zambezi River, a few kilometers east of Katima Mulilo in the Zambezi (Caprivi) region of Namibia, offering genuine hospitality in a relaxed and inf