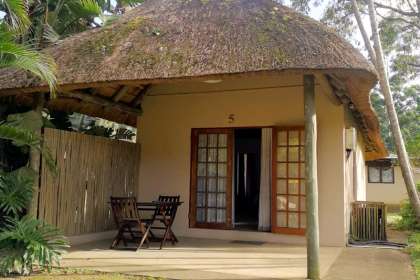 The cottage is a stand alone inside the Old Pont park and water sport resort. 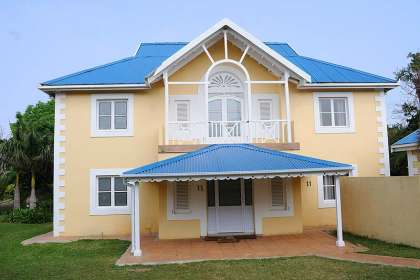 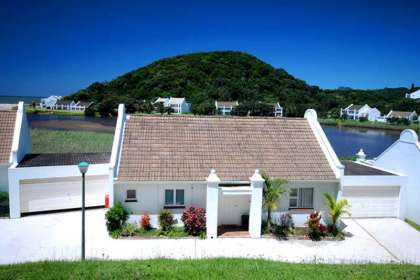 This villa is a 6 sleeper villa situated on the waterfront of the estuary and overlooking the magnificent Indian Ocean. The Main bedroom has a full bathroom en suite and ceiling fan and French doors that open to give you full view 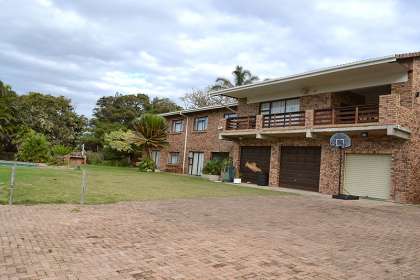 This lovely face brick home consists of the main house which has 5 bedrooms, 1 en-suite which leads onto the balcony. A full bathroom and a guest toilet. 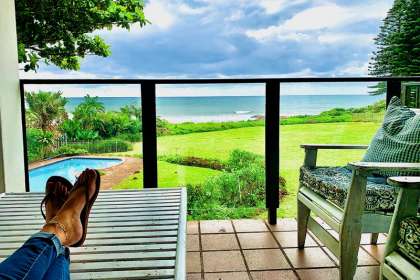 Christies Cottage is a five bedroom family cottage on the beach front with amazing sea views and a wonderful relaxed atmosphere. The cottage sleeps 10 people comfortably. 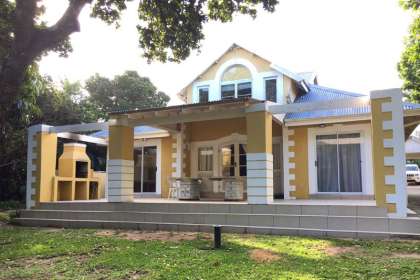 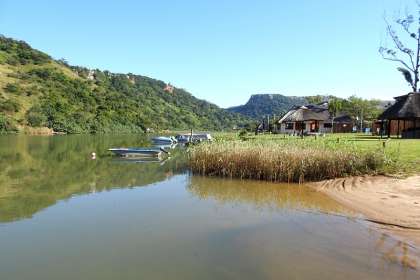 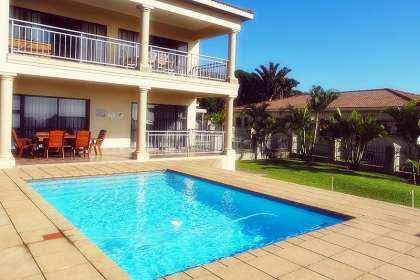 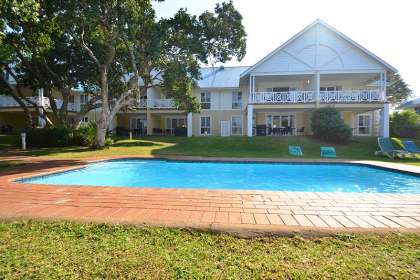 A privately owned apartment situated in Caribbean Estates unique private resort in the tropical setting of KwaZulu Natals South Coast.This fairly new apartment is fully furnished with all amenities and is right next door to Wild Coast Sun. 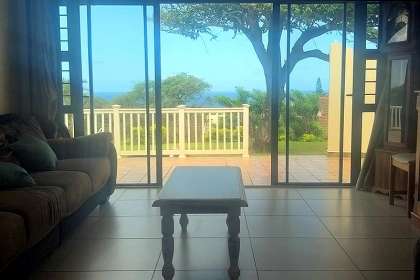 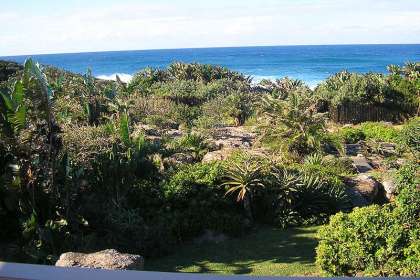 The Cave Cottage is an idyllic holiday home right on the beach, set in an indigenous garden with panoramic views of whales and dolphins. Sit back peacefully on the balcony overlooking the ocean before you, meander through the ... 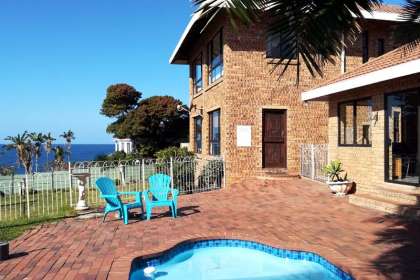 Sleeps 18 in 7 units
From R 300
Per person, per night sharing | Sleeps 2 adults max
* Rates may vary according to season

At Rockview Guest House we pride ourselves in offering the best in affordable luxury accommodation and are confident you will always enjoy your stay with us. We are only a stones throw away from the Indian Ocean and boast stunning sea views. ... 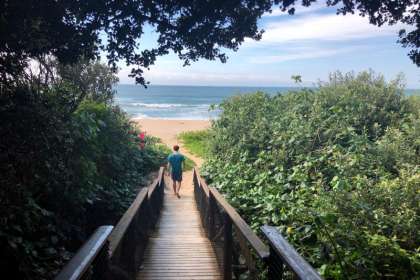 Sleeps 7 in 1 unit
From R 1900
Per unit, per night
* Rates may vary according to season

Located in a nature reservation, and separated from the beach by only one large sand dune, the experience offered here is the epitome of peace and tranquility. 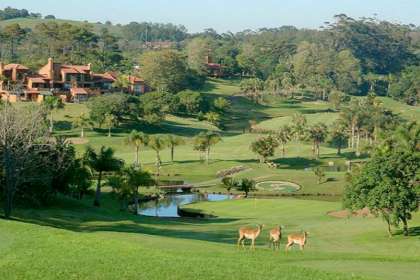 The unit is part of the San Lameer Estate, which is one of the most sought-after destinations in KwaZulu-Natal South Coast. It offers luxury villas, an 18-hole championship golf course, the San Lameer Resort Hotel & award winning Camelot Spa. 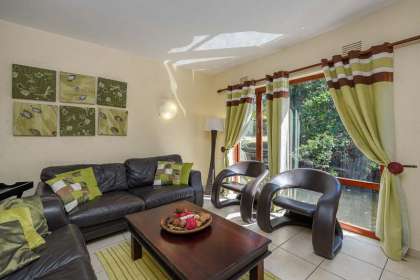 The villa is fully air-conditioned. It has a large plasma screen in the lounge with PVR satellite that is linked to the TV in the main bedroom. There is a DVD player in the lounge and DVD's can be rented from the Spar on the estate. 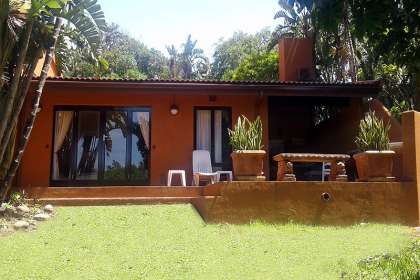 This modern, single story, private end unit comprises 3 bedrooms (MES) and 2 bathrooms. Villa is perfectly located in the middle of the estate in between the hotel and the beach, it overlooks a large grassy embankment ideal for children which leads down t 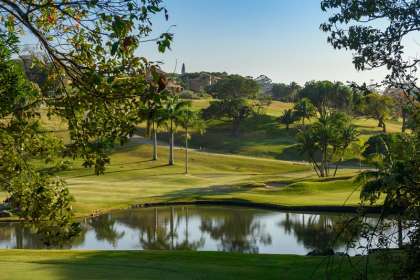 This is a free standing villa close to the lagoon and in walking distance to the beach and hotel. It is tiled throughout and has an open plan kitchen, dining room and lounge. There are 2 bedrooms, 2 bathrooms and a loft area with a bunkbed. In ... 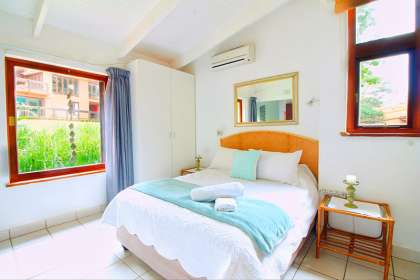 San Lameer Villa 2414 is a lovely self-catering villa located in the secure & popular San Lameer estate. The unit can accommodate 6 people in 3 bedrooms & has 2 bathrooms and is very privately located with no major roads running in the front or back 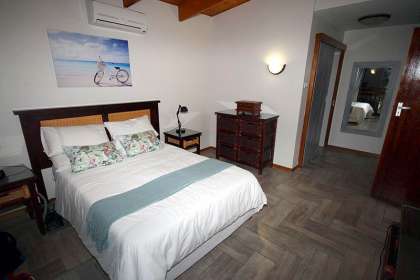 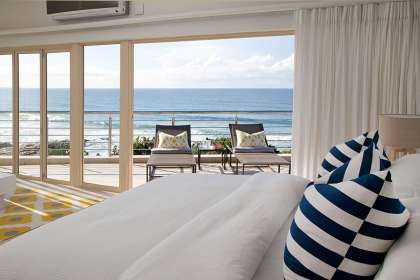 Guest Rating: 10
Graded:
From R 6250
Per unit, per night
* Rates may vary according to season

Rockshandy is a luxury, self catering beach house situated on prime beach front property in Marina Beach, which is a blue flag beach along the KZN South Coast.The property has direct access to a private beach...

Port Edward is at the southernmost tip on the KwaZulu-Natal South Coast. The town has some excellent facilities including golf, tennis, squash and bowling.

There is good direct access to the area's beaches, which are protected by shark netting. Lifeguards are always on duty during school holiday periods. Port Edward beaches offer excellent opportunities for surfing, waterskiing, jet-skiing, and rather decent fishing, both off the rocks or deep sea for those seeking a bigger catch. There are also a number of dams in the area where visitors can try their hand at bass fishing.

For scuba divers there is the wreck of the Nightingale, which met its untimely end on the rocks of Munster on Glenmore Beach in 1933. Parts of the wreck can still be seen on the rocks today, and is easily accessible at low tide.

The stretch of coastline flanking Port Edward also sets the scene for ideal dolphin and whale watching throughout the year, especially during the months of June and July which sees the arrival of "The Greatest Shoal on Earth" - the annual sardine run.

Just a few kilometers inland from Port Edward is the Umtamvuma Nature Reserve. Here the visitor will find a nesting colony of Cape vultures nestled high among the cliffs that run alongside the river. This 3150 hectare nature reserve is home to the black backed jackal, troops of baboons, and the large spotted genet, along with several species of buck, samango monkey and leopard. The thick forest is home to some 80 species of bird and is abundant with ferns, lichen and wild flowers. There are a number of informative walks from which visitors can explore the reserve.

Another main attraction in Port Edward is the Red Desert, which resembles Mars with its unusual red sands. The Red Desert is said to be the world's smallest desert, consisting of patches of grassland, forest, wetland and eroded red sands. Early, Middle and Late Stone Age artifacts have been discovered on both the Upper and Lower Red Desert, and various archeological studies have been conducted there.

The area provides visitors with magnificent views over the Umtamvuna Gorgeand Estuary. The region is a home to a variety of wildlife, including southern reed buck, common duiker, blue duiker and oribi

Other attractions in Port Edward include the North Sand Bluff Lighthouse, which visitors can climb up, and enjoy the unique view from the top. Visitors can take a relaxing cruise on a boat up the Umtamvuna River, or experience the tranquillity of the region on scenic horse rides along the beach.

The Wild Coast Sun Casino is just over the Umtamvuna river in the Eastern Cape for those wanting to try their luck at the slots or tables.

Arts and Crafts are also widely available in the Port Edward area, with a number of artists who live and work in the district. Examples of their work can be seen in local galleries.

Golfing in the area is also quite popular with a choice of four courses located at the Wild Coast Country Club, Port Edward, San Lameer Country Club, and Southbroom Golf Club all of which are rated in the top 50 golf courses in South Africa.

Other Port Edward Attractions:
- hiking in the Mpenjati Nature Reserve
- 4 x 4 trails
- bird watching with over 200 species residing in the area
- mountain biking and quad-biking trails

There's plenty to do in Port Alfred, and this charming Eastern Cape town constantly bustles with holiday makers who canoe on the Kowie River and Bushman's River, hike, kite surf, spend time in the surrounding Eastern Cape game reserves like Addo Elephant Park and Shamwari Private Game Reserve ..........and on the magnificent Port AlfredÂ beaches.
Being avid golfers, Barry and I thoroughly enjoyed playing at the Royal Port Alfred Golf Course, one of the top 18-hole golf courses in the country. The Fish River Sun Golf Course is only about twenty minutes away and is apparently a must for all golfers in the Port Alfred area.

Although Barry had also considered accommodation in the Eastern Cape's nearby towns of Bathurst, Seafield / Kleinemonde, Kenton-on-sea, Bushman's River Mouth and Fish River, he chose toÂ reconsider accommodation inÂ Port Alfred, and besides the personal memories it held for us, it still retains the charm and atmosphere of an old English fishing village. A little "Sunday drive" around the Port Alfred area showed promise for a future visit - Port Alfred self catering accommodation options are plentiful and Bed and breakfasts in Port Alfred as well as Kenton on Sea are definitely worth a visit,

One of the highlights of our trip was a visit to Port Alfred's Wharf Street, which lies alongside the Kowie River. Â Once the maritime hub of the Eastern Cape coastline, this historic street is now almost forgotten, except for a few antique stores, the old Port Alfred fish market and a betting shop which linger on the 'old side' of town.

The Port Alfred Wharf Street Brew Pub had been recommended for lunch, and we were delighted with the warm ambiance. Â We were seated at a wooden table in the dining room, which is littered with barrels and benches, while shiny beer taps line the panelled bar. Â Alongside the pub is the family owned brewery, which brews 3 'home-grown' beers - nicely complimenting our deep fried fish and crispy chips. Â Our server told us tales of the cellar - now a private dining room, which is rumoured to have hidden pirates, smugglers and slaves in days gone by. There are also plans for a restored masted whaling ship that will soon float alongside the pub, and offer short trips up and down the Kowie River.

We could have spent weeks exploring PortÂ Alfred, Kenton-on-Sea, Kleinemonde, Bushman's RiverÂ and the surrounding towns and attractions, but we will be returning again next year. Our thanks to The Halyards Hotel for an unforgettable experience, and to the people of Port Edward for their warm hospitality.

Yvonne and Barry PS. Guest houses or Bed and Breakfast accommodation in Port Alfred will be our next option - This will give us an opportunity to chat to the locals and find out more hidden secrets in the Port Alfred area.

Our wedding accommodation in Port Edward at the The Estuary Hotel & Spa was absolutely stunning. This beautiful private Cape-Dutch style Port Edward hotel, which lies right on the estuary, and just a few steps away from Port Edward's Silver Beach, is a South Coast accommodation dream come true!

There was no need to leave the premises, so Justin and I spent our honeymoon right at The Estuary Hotel in Port Edward, as there's a wide range of KZN South Coast activities right on the door step - scuba diving, surfing, mountain biking, horse riding - and the Wild Coast Sun Casino is just a short drive away. Besides the great South Coast Accommodation, there are two top rate golf courses both only a few minutes away (Wild Coast Sun Country Club and San Lameer Country Club) - it's no wonder the Port Edward Estuary is called the "Golfer's Jewel."

Thanks to The Estuary Hotel & Spa for making our KZN South Coast wedding day so memorable on this 'little piece of paradise'.

On our next visit we will most certainly research the South Coast self catering accommodation and South Coast bed and breakfast options.